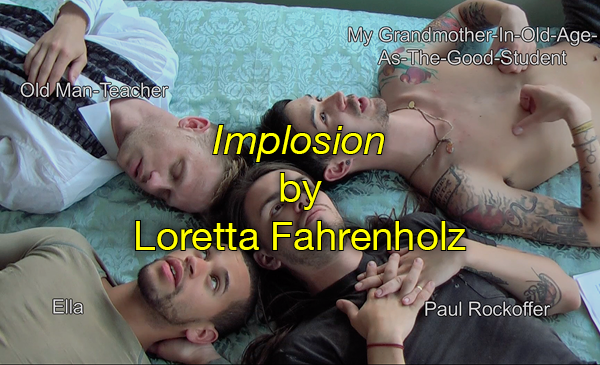 The Last Days of August by Jon Ronson [podcast]

Original Script of Implosion by Kathy Acker, annotated by Loretta

The film Implosion is based on a play of the same name by American author Kathy Acker. Originally about the French Revolution and set in early 1980s New York City, Fahrenholz films the piece 2011 in Downtown Manhattan shortly before the period of Occupy Wall Street. The film is an experiment in translation, not only between mediums and formats but also between decades and bodies.

Implosion can be seen as a continuation or exacerbation of a literary gesture initiated by Acker, whose drama transposed historical content into the language and bodies of downtown punks, drug addicts and sex workers. Fahrenholz’s adaptation involves a cast of contemporary non-actors, young men who in real life spend their time in gyms, clubs and on iPhones, some of whom work as graphic designers or internet porn actors but are mostly between occupations and in flux. By making Acker’s punk voice return through the channel of these young bodies and in these mouths, Implosion occupies and activates the gap between two New Yorks (1983/2011), in-between a hard, transgressive, recently bankrupt city still swarming with homeless people and the smooth, networked, abstract New York of today.

The word “revolution” sounds strange again here, as it has down in the street these past months, with New York preparing itself for continued disaster in the wake of this global financial crisis. Shot in a high-rise condominium located near Ground Zero, the film’s actors are seen against vistas of postmodern glass curtain wall architecture and open blue sky, planning chaos and terror on laptops. These are the slim, dispersed and connected, abstract bodies of cyber-capitalism, and we still don’t know what they are capable of, what they want. Implosion produces an HD image of the horror and anxiety of the now, allowing us to see ourselves freshly from the punk perspective of a vanished SM bohemia, and seeming to urge a betrayal of the present.

For I wanted to tell you…, Loretta has chosen to frame her work with the podcast The Last Day of August by Jon Ronson, in which he revisits the story of the porn star August Ames, who killed herself in 2017 at the age of 23. For a more oblique reading of her work, she refers to a short excerpt from My Mother Laughs by the Belgian filmmaker and artist Chantal Akerman. This memoir on the fraught relationship between the filmmaker and her mother was published in 2013. It was the last book to be written by Akerman before her death. Finally, we are publishing a never before published selection of scans from Kathy Acker’s original screenplay with annotations and comments left by Loretta as she was making the film.

Loretta Fahrenholz is an artist and experimental filmmaker based in Berlin. Working closely with the actors who perform in her work, her pieces slip in and out of fiction and reality. Cheekily referencing specific genres, such as disaster flicks, documentary and porn, her films allow for these genres to amalgamate, fuse, and conflict with each other, both affirming and resisting identification. In her post-cinematic films, Fahrenholz documents collective fictions, angst and desires, emerging from whatever degree of intention among the actors, narratives and the given means of production. Isolated bodies attempt to function as a community, sometimes they succeed, sometimes they fail.