Anna M. Szaflarski is a storyteller. She is a writer, artist and publisher who draws from narratives of biology, science-fiction, mythology, surrealism crafting alternative metaphors for the everyday experience. She studied at Emily Carr University and at the Universität der Künste Berlin. In 2008, she co-founded the artist book publishing house AKV Berlin. She has published many artist books, notably her collection of essays and fictions alongside contributors in Letters to the Editors (Bom Dia Boa Tarde Boa Noite and AKV Berlin).

According to astrology, I am a Gemini. In theory, this is something that I reject as nothing more than superstition, but like many people, I can’t help but identify with its description of my character, or investing some mental energy into its cosmic forecasts. Like the constellation dictates, I feel like two people of two contradictory minds bound together.

The central work of the exhibition, The Annunciation is reminiscent of a 1970s comic book. Set during a time of rampant biological flux, the narrative centers on a female protagonist who is haunted by recurring dreams of monstrous insect mutations. The dreams are an exaggeration of her reality, as her world is in fact infested with flying and biting insects. In this world, the citizens do not react to these new and hostile living conditions dramatically, but instead they attempt to ignore, normalize and adapt. They cover the buildings in netting, they spray pesticides onto the streets and they wear something akin to bee-suits. But the forces cannot be ignored or cordoned off. And what at first seems to be nothing more than menstruation cramps becomes much more radical: a mitosis-like division of the protagonist’s entire being.

The title of the work is taken from the Annunciation motif, commonly used in Medieval and Renaissance paintings that depict the announcement by the angel Gabriel to the Virgin Mary (the Christians celebrated this day on March 25, a little over a week after this opening and nine months before Christmas). According to Gabriel, Mary is to carry to term and become the mother of Jesus, god’s son. The annunciation seems more like a violation than a blessing. Such a thought is given form in many Renaissance works, and most powerfully in the fresco by Fra Angelico (1437-46), in which Mary, who is described in scripture as blessed, humble and demure rather appears cornered, alone, shocked, and passive. How is the condition of Mary’s impregnation through a spirit not terrifying? How is it not a rape?

Gemini is about inner or internalized contradictions. The exhibition considers what is at once believed and disbelieved, and what we are in any case inextricably tied to, implicated in, and what we cannot avoid accepting. It is about the murky area between imperative and will, where interior and exterior forces seem to cross their own boundaries.

Intersecting biology, ecology, science fiction, mythology, and religion, the drawings on view in Gemini take their cue not only from the Italian masters whose work focused almost exclusively on illustrating religious narratives, but also Ridley Scott’s movie Alien, comic books like the science-fiction classic Xenozoic! (Mark Schulz, 1986), and the illustrations in the books of biologist Lynn Margulis. 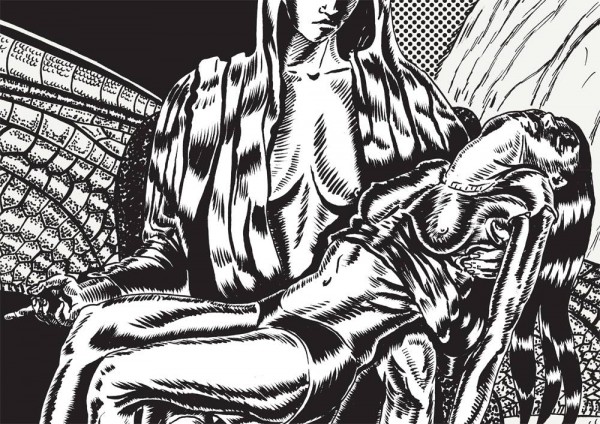